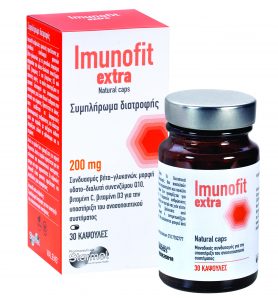 The Imunofit line offers a selection of products for various needs: capsules for adults with the high level of beta-glucan on the Greek market syrup for adults, who cannot or wish not to consume capsules a very tasty syrup Junior for kids For optimal effect, we recommend regular consuming of capsules or the syrup for at least a month.

1 capsule contains 200 mg of β-(1.3)-(1.6)-D-glucan, 80 mg of vitamin C and 20 mg of the water-soluble form of coenzyme Q10 and vitamin D3 800iu. Capsules are naturals and elongated in order to ease consummation and contain an ingredient for accelerating their decomposition in the stomach for the purpose of rapid absorption. Capsules do not contain any ingredients of animal origin and are therefore, in contrast to gelatin capsules, also suitable for vegetarians.

Recommended consummation of 1 capsule per day for at least a month (in case of increased needs two capsules per day are allowed). Consume the capsule at least half an hour before a meal, in the morning or in the evening. Imunofit syrup for kids, in contrast to products for adults, does not contain the Q10 coenzyme, since the fall of Q10 levels in the body occurs after the age of 20.
5 ml of syrup contains 100 mg of β-(1.3)-(1.6)-D-glucan,5 μg vitamin D3, 3 mg zinc and 25 mg of vitamin C. The syrup is prepared on the basis of a glucose-fructose syrup and has a pleasant green apple aroma. It does not contain any ingredients of animal origin and is therefore also suitable for vegetarians.

The recommended daily dosage for the syrup: children above the age of 3: 5 ml (1 dosing spoon), youth above the age of 10: 10 ml (2 dosing spoons). Consume the syrup at least half an hour before a meal, in the morning or in the evening. You may consume it undiluted or mixed in a glass of water, tea or another beverage. In case of the latter, you are to consume it soon after preparation. Diluting does not affect the quality of the product.

The human body has a highly sophisticated immune system for defending against foreign particles. Our body is constantly in contact with bacteria, viruses, fungi and parasites – we either ingest them with food or drink or they enter our body through the skin, e.g. upon injuries. The task of the immune system is to timely identify foreign particles, mobilize immune cells and thus prevent the progression of foreign particles in our body. Most radicals in our bodies arise from the process of transforming nutritious ingredients into cellular energy. Additional and ever more important sources are a polluted living environment and exposure to the sun (UV radiation). Important factors, which have a negative effect on the defensive capacity of our bodies, are also an unbalanced diet and resulting anemia, stress and other psychophysical loads. The effect of other illnesses, allergies and regular use of certain medication is also known. With an efficiently functioning immune system, infections are relatively rare and the responses to them intensive.

Advice for strengthening the immune system:

The most effective method of fighting off cold is definitely prevention:

If a cold nevertheless occurs, you may help your child in various ways:

The main source of vitamins and minerals are fruit and vegetables, which a child should consume regularly. A child’s diet should include fresh food, grains, natural sweeteners and as little preservatives as possible. If you have trouble ensuring a proper diet during certain periods, we recommend adding nutrients with appropriate food supplements. This is especially relevant during the winter, when fewer fresh fruit and vegetable are available.

Beta-glucans are dietary fibers and represent a wide group of natural saccharides. Beta-glucans have a very diverse chemical structure, due to different origins, and consequently very different biological roles. This is why it is extremely important for the efficiency of a food supplement, which beta-glucan it holds.
Imunofit products contain a highly active β-(1.3)-(1.6)-D-glucan, isolated from cellular walls of yeast, for which a beneficial effect on the functioning of the immune system has been clinically proven. These kinds of beta-glucans are known by the expert public as an extremely effective natural ingredient for supporting the immune system.

This is a water-soluble dietary fiber, which is located in the bran of grains, particularly barley and oat, but does not have a substantial influence on the immune system.

This mainly non-soluble fiber is located in the cellular walls of yeast. Its beneficial effect on the immune system has been proven, therefore these beta-glucans are the ones we used in our Valens Imunofit products.

They are found in cellular walls of different mushrooms and are mainly water-soluble and structurally similar to those from yeast.

Beta-glucans represent a wide group of natural polysaccharides with a number of biological properties, therefore it is very important to choose the optimal form in regard to intended use. Valens Imunofit products use a special form of beta-glucans, isolated from yeast, for which it has been proven that they support the immune system. Addition of coenzyme Q10 in vitamin C When the immune system responds to the entering of foreign particles, the release of radicals also increases; therefore it is extremely important that our body also has a well-functioning defense against these reactive molecules. The other two ingredients in Imunofit products, coenzyme Q10 and vitamin C, have an important protective role. Both of them are essential components in the protection of important biological molecules against oxidative damage, since they are natural anti-oxidizers, which protect the body from radicals, harmful reactive ingredients, which accelerate aging and are the cause of various illnesses.

Advantages of the Imunofit line

The immune system protects the body from infections caused by foreign particles (e.g. bacteria, fungi, viruses, etc.), which manage to enter the body. In general, we can divide it to (1) the innate and (2) the acquired immune system. The latter incorporates a specific response with immunological memory, which occurs only after a certain period of time. In contrast, the innate immune system incorporates a non-specific response (no immunological memory), which occurs instantly and on the greatest scale. Beta-(1.3)-(1.6)-D-glucans from yeast cultures support the functioning of this innate immune system, since they activate our natural defense system against foreign particles by binding to macrophages in the intestines via reinforced phagocytosis.

Image: Studies have shown that a part of the consumed β-(1.3)-(1.6)-D-glucan is captured by macrophages in the intestines, which transfer it to tissues important for an immune response.

Transfer from the intestines to the blood stream via Peyer plates
Peyer plates are a part of the final section of the small intestine, which is of crucial importance to the immune system. By marking molecules, researchers have determined that via the cells in this part of the intestine, beta-(1.3)-(1.6)-D-glucans bind to macrophages, which then transfer them to other parts of the body that are important for the immune system..

Immune response
Binding of beta-(1.3)-(1.6)-D-glucan fragments with receptors of the innate immune system’s cells triggers an immediate immune response, which can be reflected in many ways, e.g. with (1) reinforced phagocytosis and (2) an oxidative assault (cytotoxic action of macrophages).
During phagocytosis macrophages or other phagocytes engulf and dissolve foreign particles. It has been determined that neutrophiles bound with beta-(1.3)-(1.6)-D-glucan fragments migrate to the place of infection faster.
Oxidative assault with cytotoxic action of macrophages is the secondary mechanism of the innate immune system for fighting off foreign particles. Macrophages and neutrophiles increase oxygen consumption and begin generating cytotoxic oxygen metabolites for fighting off foreign particles. Binding beta-(1.3)-(1.6)-D-glucan fragments with appropriate receptors of the innate immune system increases the possibility of such an assault on certain foreign particles. Since an oxidative assault is accompanied by a release of very reactive radicals, it is important that the body has a well-working defense, which protects healthy tissue from damage. The other two ingredients of Imunofit products, coenzyme Q10 and vitamin C,vitamin D3,zinc have an important role in this process. Along with an important role in protecting important molecules in our bodies from oxidative damage, vitamin C also has other well-known biological functions.

Production and quality of ingredients
Imunofit products use: β-(1.3)-(1.6)-D-glucan, isolated from yeast, coenzyme Q10 of fermentation origin in a patented water-soluble form,vitamin D3,zinc and the L isomer of ascorbic acid (vitamin C) in the natural form, as it is found in our bodies. All ingredients are of non-animal origin and are therefore also suitable for vegetarians.
Our production runs according to medicinal product standards, therefore we have introduced a system for releasing products onto the market only once analyses have confirmed that the declared content of the active ingredient of an individual batch matches with the actual and that the safety of the final user is assured.

Imunofit products safety and contraindications
Verified ingredients in Imunofit products make consuming them safe. Unwanted occurrences have not been detected, even in chronic consumptions with excessive doses. Beta-glucans, coenzyme Q10,vitamin D3,zinc and vitamin C are naturally found in food. We do not recommend the use of our products to patients with autoimmune disorder or those, who are taking medication for suppressing the immune system.Pregnant and breastfeeding mothers should consult their physician our pharmacist prior to consuming. 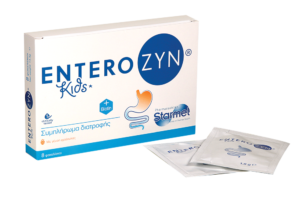